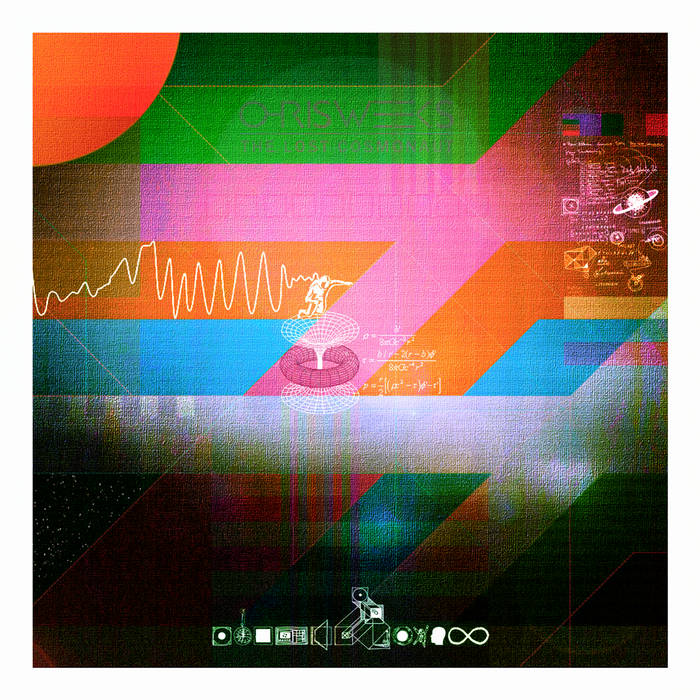 We at Odd John Records are proud to announce our debut release - 'The Lost Cosmonaut' by Chris Weeks. www.oddjohnrecords.com

"The album presents 10 tracks of expansive new-age synthetic ambience which suit the record’s sci-fi theme perfectly, but also recall the more pastoral side of Krautrock and the plaintive washes of the likes of Brian Eno...The suspended, timeless quality which dominates the music on ‘The Lost Cosmonaut’ is sure to appeal to fans of a slower, layered listen"... Review @ Bleep.com : bleep.com/release/47095-chris-weeks-the-lost-cosmonaut

..."A drone Odyssey made of dreamlike visions, solitude and desolation"... Review @ 'IRM' : www.indierockmag.com/article23484.html

..."Hope, wonder and loneliness are mingled throughout the album"... Review @ 'a closer listen' : acloserlisten.com/2013/09/27/chris-weeks-the-lost-cosmonaut/

Chris talks us through his concept & the story behind his new record:

While searching for a theme for a new project, one which would provide continuity from my previous work Contemplation Moon, I discovered the conspiracy theory ‘Lost Cosmonauts’.

The essence of the theory is as follows:

“Lost Cosmonauts, or Phantom Cosmonauts, is a conspiracy theory alleging that Soviet cosmonauts entered outer space, but without their existence having been acknowledged by either the Soviet or Russian space authorities. Proponents of the Lost Cosmonauts theory concede that Yuri Gagarin was the first man to survive space travel, but claim that the Soviet Union attempted to launch two or more manned space flights prior to Gagarin's, and that at least two cosmonauts died in the attempts.”

There is an account relating to this conspiracy which claims to be unequivocal proof of these undisclosed missions:

“The Judica-Cordiglia brothers, sons of one of Europe's foremost pathologists, set up a listening post which probed the cosmos and successfully tracked the entire early American and Soviet unmanned satellites. The geographical location of their station proved particularly suitable for the reception of soviet space vehicles, which regularly flew over Northern Italy during their approach to the soviet tracking centres in the Caucasus. Using an array of advanced equipment, the two young Italians soon learned which radio frequencies to monitor and how to predict the ‘flyover’ times of the various space probes. One day in early 1961, weeks before Yuri Gagarin's epic space flight, instead of the usual beeping tones which they had become accustomed to hearing, they were startled by a sound which signalled a new chapter in the history of mankind: There, in the listening centre of "Torre Bert", these two young students heard, clearly and unequivocally, the beat of a failing heart and the last gasping breaths of a dying cosmonaut.”

Without hard evidence, it is easy to dismiss this conspiracy theory as mere conjecture. Still, there are well-rounded arguments for and against, and it is still widely debated to this day. However, the validity of this theory was not my primary concern. My research into the ‘Lost Cosmonauts’ helped plant the seed of inspiration needed to form the basis of this album, while allowing me to maintain the conceptual-continuity I coveted.

This album, and the following short story, is a fictional account of one such ‘Phantom Mission’.

Communications check, ‘Comms’. Strapping himself into his craft, the courageous cosmonaut runs through his substantial pre-flight checklist, triple-checking everything. Weighed-down by expectation, gravity and fear of the unknown, he takes time to contemplate his fate. Tentatively he aims toward the sky.

Blast-off! ‘Thrust’: The stress & strain upon pilot & craft are immense, but what seems like an age of tumultuous turbulence soon passes. With calm, calculated concentration, the cosmonaut caresses his controls, making careful corrections to his designated flight-path. There is little to no room for error, as he tries to gently guide his ship into orbit.

Disaster! Buffeted by a geomagnetic storm, the craft and its now mere passenger miss their planned trajectory, veering wildly off course. Tremendous forces bombard both cosmonaut & capsule from every angle. Blacking-out, he drifts into the deep dark recesses of his mind, and Space.

The following tracks are the narrative of an 'unexpected voyage of discovery.' The sights, sounds & emotions experienced by this intrepid, incidental, encapsulated explorer…

…Floating in deep space, he stirs. The gentle hum of interference from his instrument panel, sounds of distant radio-waves, high-frequency static & crackling Geiger counters combine, flooding the cramped confines of the craft with sonorous dissonance. Creeping into consciousness, with only a small reinforced window from which to view his surroundings, The Lost Cosmonaut experiences a sensory overload; an array of beautiful, ethereal encounters. Dream-like visions appear as if from nowhere, in wondrous polychromatic contrast against the infinite black.

A haunting stellar-remnant nebula ‘NGC 3242’ ghosts into view, filling his star-struck eyes with a cornucopia of colour. Giant interstellar clouds of gas, plasma and dust manifest, creating the illusion of being adrift on a vast psychedelic ‘Lagoon’. The concept of time becomes nothing more than a man-made construct. In this isolation, mere minutes seem like an ‘Aeon’. Only a ‘Pulsar’, emitting its pulses of radiation & radio waves, with a high degree of regularity, can suggest the reassuring metronomic rhythm of a celestial clock. Kaleidoscopic, radiating rainbows of photons from a nearby ‘hot star’, its ‘Emission’ cascading a droning, static-fuelled resonance, are awash with the fragmented frequencies of their long lost cousins. A wall of white noise reverberates deep within his subconscious, its soporific sound lulling him into a false sense of security. Then, silence. The colours fade from view. Once more, man and machine drift languidly into the jet black vacuum of deep space.

With oxygen diminishing & CO2 levels critical, he sits, motionless, not daring to breathe. A stark realisation consumes his consciousness. He may never again see the beautiful ‘blue marble’, Earth, his home.

Desperately trying to focus his fractured thoughts, the alienated astronaut, with an educated guess and a heart full of hope, aims his craft from whence he came. Sparingly, he fires his fuel-depleted retrorockets, before the lack of breathable air renders him unconscious; comatose; ‘Stasis’…

Miraculously, the craft finds its way through the void, retracing its previously ventured course, as if guided by some benevolent force. Temperature soaring it races into the ‘Ionosphere’, somehow navigating the ‘space-debris’ & man-made satellites which litter its orbit. Scorching through the stratosphere at terminal velocity, the cosmonaut and his craft hurtle toward the ocean. The parachutes fire! With a massive jolt, and huge gravitational force, the capsule slows, and once again drifts, aimlessly toward its watery resting place.

Onboard radio transmitters spark into life, emitting an eerie drone & twittering frequencies, as if the planet is welcoming them home. Familiar sounds echo through the air; distant birdsong, scattered voices, breaking waves. ‘Earth’.

Akin to the Lost Cosmonauts conspiracy theory, the 'reality' of this scenario is obviously highly questionable. The fate of the Cosmonaut; has he managed to survive this incredible ordeal or not, is left unanswered; perhaps drawing a parallel with the Schrödinger’s Cat Paradox, which, greatly simplified, postulates that: a cat in an unopened box may be both alive and dead, depending on an earlier random event.

I consider this album a work of both science fiction and fantasy. Utilising these two literary art forms allowed me to widen the scope of plausibility, resulting in a more creative, open-minded approach. The music, concept & story should serve as a guide, enabling the listener to experience, shape & embellish this ‘unexpected voyage of discovery’ with their own interpretation & imaginings.

When facing the unknown, with little to no control, isn’t it often better to accept your fate, appreciate the experience with unquestioning abandon; sit back, and enjoy the ride?

I should also give mention to the excellent book ‘Star Maker’ by Olaf Stapledon, which I read prior to making this album. Elements of ideas within the book have crossed-paths with the ‘Lost Cosmonauts’ conspiracy, helping form the ambient aesthetic & theme of interstellar travel, which underscore the concept of this record. (I highly recommend reading ‘Star Maker’ or any of his works).